*Book Tour & Giveaway* The Beast Within by Nina Soden-GUEST POST 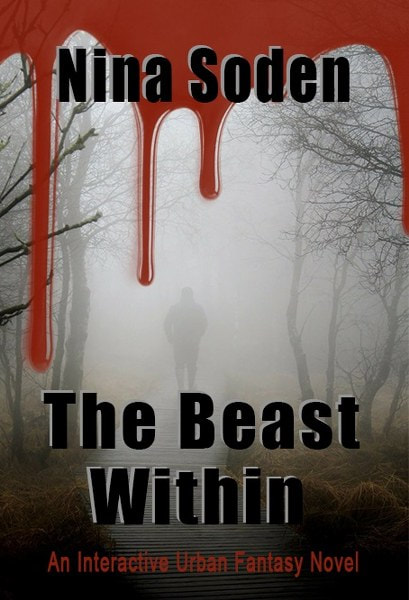 The Beast Within
by Nina Soden
Genre: Interactive Urban Fantasy
Austin discovered, at the young age of ten, that fairies aren’t exactly what the fairytales made them out to be and that blood tastes a lot like honey. Now, as an adult, he struggles to balance his public life with the one he’s so desperate to keep hidden. After a deadly camping trip and an unexpected connection, Austin tries to change his ways. Will he be able to keep his secret or will his world come undone? In this exciting interactive adventure, the body count is up to you. Are you ready?
**Only 99 cents!**
Goodreads * Amazon
Nina has always been creative, be it art, theatre, film – anything but singing – you don’t want to hear that! She earned her bachelor’s degree in Theatre and Military Science from Eastern Michigan University where she spent most of her time either on stage, rappelling down buildings, or working one of three jobs. After college she moved to Los Angeles, like so many other actors, in pursuit of her dreams. Nina started writing short stories in 2008. Since then, her dreams have gotten bigger and she likes to think her storytelling ability has gotten better. She has done everything from secretarial work to business development to being the Director of a private preschool. She has fired a M16 machine gun, jumped out of a C130 aircraft, and given birth – TWICE - but she always returns to her art.
She has two completed series available; The Blood Angel Series (Awaken, Beginnings, Revenge, and Pursuit) and the SECTOR C Series (The Chosen, The Hunted, and The Bridge). Her latest novel, an interactive urban fantasy novel, The Beast Within, is a standalone story with eleven (11) possible endings and twenty-six (26) opportunities for the reader to try and change the story. The Beast Within is currently available for pre-order on Amazon and will be available for purchase on March 1, 2021.
Though she’ll forever be a Michigan girl at heart, she now lives in the south with her husband and two beautiful children. If she’s not working on her latest story, you can find her lounging with a good book, playing with her kids, or indulging in her unhealthy addiction to Starbucks coffee.
Website * Facebook * Twitter * Instagram * YouTube * Amazon * Goodreads
GUEST POST

GUEST POST – What Inspired you to Write THE BEAST WITHIN

It was actually a nightmare. A lot of my book ideas come from dreams, but this one was a re-occurring nightmare. I had it probably 5 or 6 times in the course of a five-month period. At first, I fought it. I didn’t want to tell Austin’s story. It was darker than I am used to writing and I knew it wouldn’t be in the YA/NA genre that I usually write in. The idea of writing an adult focused novel was a little intimidating at first. I wasn’t sure how my readers would respond.

It wasn’t until I gave the first several chapters to a trusted friend to read that I realized I needed to finish it. She was drawn into his world right away and continued to ask me about him on a regular basis. I was also pulled in, the more I wrote the more I wanted to know what would happen next.

I hadn’t plotted this one out, not at first. I let the characters tell me where the story was going and what they planned to do next. Once the first draft was completed, I decided to create an outline and start re-writes. The re-writes led to whole new storylines coming out. For that very reason, I decided to make THE BEAST WITHIN an interactive novel, allowing the readers to decide what would happen and how the story would go.

Changing THE BEAST WITHIN from a traditional style novel to an interactive urban fantasy novel was not an easy task, but I think it was well worth it. All of Austin’s possible storylines were able to be told and the reader is taken on an adventure like nothing I’ve written before.